What the Midrash Means Series - 1:2 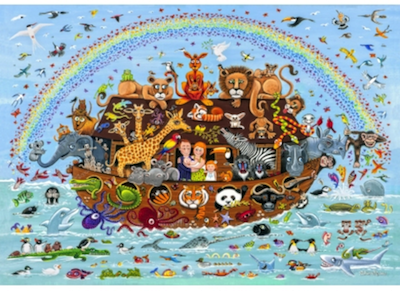 Environment unquestionably contributes to a person’s stature or lack thereof. This principle is acknowledged explicitly in Chazzal[1] many times including in the Midrash Rabba itself (Bamidbar Rabbah 18:5). It is obvious that Noach would have been an even greater man had he lived in greater times surrounded by greater people. So what is the central idea at issue in the debate between Rabbi Yehuda and Rabbi Nechemia? How do we understand Rabbi Yehuda’s view that Noach was only attributed with the characteristics of a Tzaddik because he lived in an environment where everyone else was so terribly corrupt. Surely, as Rabbi Nechemia sargues,the Torah credits Noach even more for his greatness than had he lived in the times of other great spiritual luminaries?

The issue at hand is not whether Noach would have acted with equal or greater piety had he lived in greater times. Of course he would have. If your child is a star at a school populated with dropouts and gangsters, there is no danger in moving him to a school whose students are all upright and refined stars. He will definitely perform at least as well when surrounded by others as good as, or better than, he. Everyone agrees that environment impacts behavior. Rabbi Yehuda’s issue is a different and a much more complex one.

The question the Midrash grapples with is how much credit should an individual take for accomplishments that are a function of his or her environment rather than their own struggles in spite of surroundings that are inhospitable to ethical growth? Often we are quick to blame environment for our (or our children’s) inadequacies. Should we then not also credit environment with our successes rather than take the credit ourselves?

Rabbi Nechemia argues that our accomplishments are almost always due partly to factors that were not our own doing. The parents we are born to, the educational institutions we were sent to, the communities we lived in all impact who we are. This should not diminish the credit we deserve for managing these conditions in ways that yielded great outcomes. There are others who had similarly positive upbringings and experiences but did not turn out the way we did, Clearly then, we own our own accomplishments (and shortcomings) irrespective of external factors that may have contributed to our success.

Rabbi Yehudah differs. He acknowledges that a positive environment impacts positively on individuals in that environment. He merely suggests that the growth and success due only to the environments in which we live or operate, is no credit to us. Since in a different environment we would not have accomplished that success, we cannot take credit for it. Had Noah lived in greater times he would have acted with greater piety, but that piety would not have been his own.

Rabbi Yehudah’s view teaches a crucial and seldom understood principle of human accomplishment. Rabbi Yehudah teaches that we were not put in this world merely to accomplish; we were put here to own our accomplishments. We own our accomplishments by struggling for them, by resisting the forces of moral entropy and inertia, by overcoming the powerful gravitational forces that pull humankind downwards. We own our accomplishments by the growth we invest in, the sacrifices we make to serve others and to amplify sanctity in a world that does not necessarily value spiritual growth and sanctity. Of course we are expected to be greater when we live in great places or in great times, but we can only take credit for the greatness we own, not for the greatness we were given.

The Mesillat Yesharim,[2] counseling people against arrogance, cautions talented people not to take pride in their talent. Talent is a gift and not something we have either earned or truly own. We own what we do with our talent, how we apply it and how we grow it. We should take pride not in what we have, but in what we have created.

Take a moment to write down all the things, people, experience, growth, opportunities and insights that you have created. You will find you own a fortune and have much to be proud of.